Sit back, relax and enjoy some of the finer things in life

Although the temperatures were fine during mid-May, some untimely rain and prior commitments caused me to fall behind in the garden. Memorial Day weekend was when I was supposed to get caught up but a late season bout with the flu keep me off my feet all holiday weekend and into the next week. Now I’m really behind the eight ball.

That didn’t stop the weeds from growing  — they happily grew while my veggies and flower transplants patiently sat in their flats waiting for me to get them into the ground.  One of my lushest weeds right now is lambsquarters. The pure stands coming up in my beds make it look like I purposely planted them there as a crop. 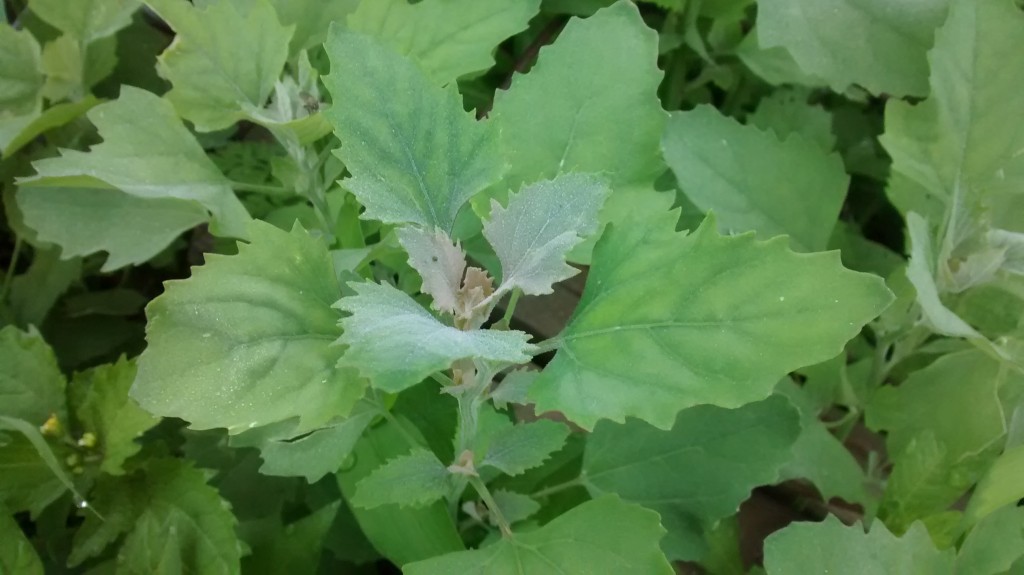 Tiny, hairy cells on the surface of the leaves produce a waxy, powder that some people find objectionable. Thorough washing will remove most of it

I didn’t plant them but I sure am using them as if I did. Lambsquarters are the most nutritious plant that grows in the garden. It makes the “super-food” kale look like junk food by comparison. Well maybe not junk food, but it is much more dense in most minerals and vitamins on a gram per gram basis than kale. A serving of lambsquarters has more minerals, by far, than a serving of kale. But to be fair, kale has more vitamin C than lambsquarters.

If you like the textures and tastes of a wide variety of salad greens, you’ll enjoy lambsquarters. It sort of reminds me of chard but it has its own texture and taste profile.

Raw lambsquarters has a small amount of oxalic acid but so does kale, spinach, all berries and many other foods including chocolate.

This morning for breakfast I made myself a frittata with lambsquarters and feta cheese. The blueish green leaves turned a bright green after a few seconds of steaming. When added to my deep-yellow, free-range eggs it made an appetizing color combination. The feta cheese added a tasty balance to the earthy flavor of the lambsquarters. It’s my favorite breakfast ingredient this time of year, right behind bacon, sausage and hash browns.

I’ve written about lambsquarters before and will probably will do so again but that is because such a gift from the garden shouldn’t be over-looked just because it is a weed.

Don’t be lulled into a false sense of security though. It is still a weed, a very aggressive weed that’s easy to control when it’s small but can quickly get out of hand if you let it. In a couple of weeks you’ll be wishing you didn’t save that patch to use as a salad green.  Get rid of it as it appears and don’t worry, more will sprout up through the season.

Related Posts in Gardening on The Good Life